Decennial Censuses of the United States: About data.census.gov

Data.census.gov is the new platform to access data and digital content from the U.S. Census Bureau. The Census Bureau is currently working on a full release of data.census.gov as it transitions away from American FactFinder. Although not all of the tools are available on data.census.gov quite yet, users will be able to explore data by browsing through topics or conducting an advanced search. Users can also visualize data through interactive maps and tables.

Since the Decennial Census is taken every 10 years the Census Bureau initiated the American Community Survey (ACS) to sample subsections of the population for daily polling, business intelligence, and statistical inquisitiveness purposes. The ACS is a rolling sample survey that gets its annual data from three annual datasets, that being the 1 year, 3 year, and 5 year estimates - although the 3 year estimates were discontinued after 2013. Knowing the difference between the Decennial Census and ACS surveys will help when browsing data.census.gov. An example search of the population of Colorado showing ACS results can be seen in the screenshot below.

Since it is the obligation of the Census Bureau to provide the most complete and accurate population count possible for apportionment of the seats in the U.S. House of Representatives, it is important that the Census Bureau recognize many kinds of geographic areas. To learn more about the way the Census Bureau determines geographic subdivisions you can reference the Geographic Areas Reference Manual.

There are two kinds of geographic entities to be aware of when researching census statistics. Below is a list of each entity and the geographic areas each entity covers, as well as the Standard Hierarchy of Census Geographic Entities diagram. 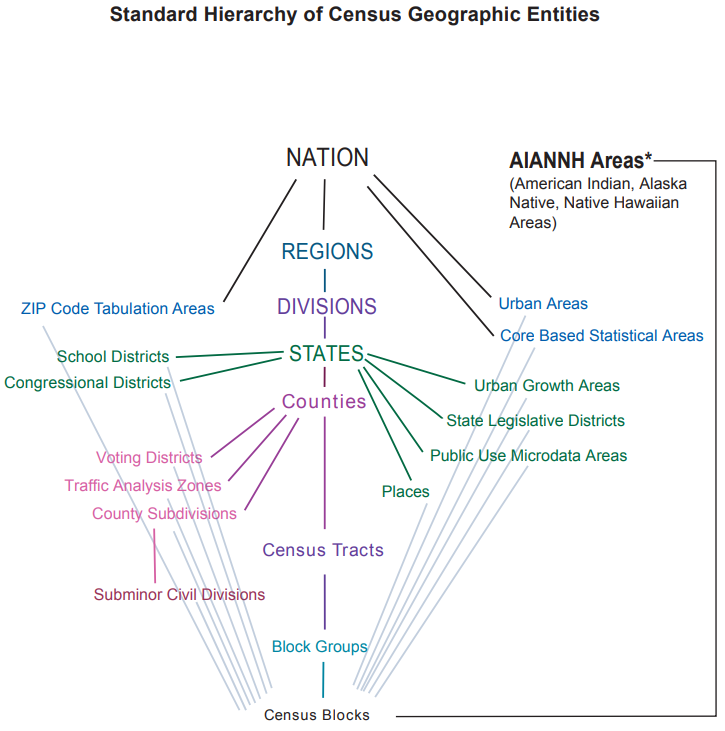