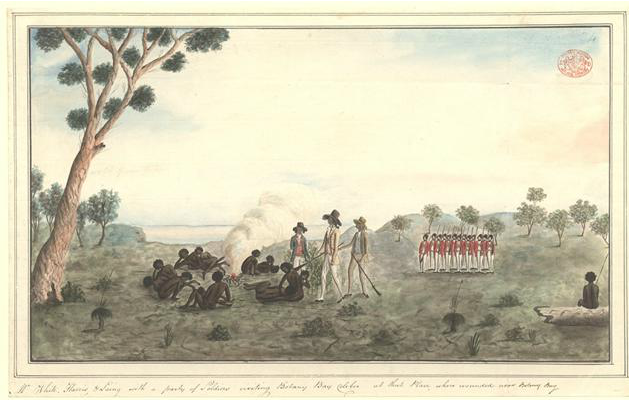 The drawing is annotated in black ink at bottom "Mr. White, Harris, & Laing with a party of Soldiers visiting Botany Bay Colebee - at that Place, when wounded", followed in brown ink in what appears to be a different hand by "near Bolony Bay".
The figure of an Aboriginal man to the right of the composition is labelled in pencil "Colebee", and the tree to the left "arid Gum Tree".
The drawing is unsigned and undated.
Bernard Smith (Wheeler and Smith, 1988, pp. 227-8) suggests that the incident depicted may relate to an event of December 1790, when John White took part in a punitive expedition to visit the Aboriginal people of Botany Bay following the killing of a convict. White was the Surgeon-general to the colony, while John Harris and Edward Laing were, respectively, Surgeon and Surgeon's mate of the New South Wales Corps; perhaps they were intending to help the wounded Colebee, referred to in the annotation.
The drawing represents an encounter between British colonists and Australian Aborigines at Botany Bay.

Image and partial caption from ARTstor